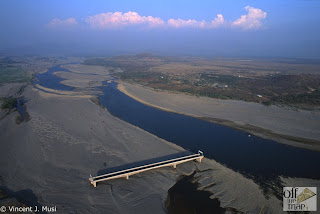 I just got back from a great weekend with a bunch of campus ministers in Oxford, Mississippi. Dan Kimball spoke, did a great job, and (as always) raised some good questions especially for us in campus ministry.
In his first session, he showed us a picture that blew my mind. Well, I guess it was the thought associated with it that blew my mind. This picture shown to the right here is a picture of the Choluteca bridge in Honduras taken after hurricane Mitch in 1998.
The power of the hurricane was so great that the river actually moved! I'd never even heard of something like this happening before, except for a river becoming wider or gradually changing the flow as time goes on. I've never seen a river move to a completely different place so suddenly like what is pictured.
When Dan related this picture to our culture moving, I knew exactly where he was going! As the church tries to "fish for people" they must change and adapt to the shifting river. Sometimes the shift is small, but other times the shift is enormous! And that makes people nervous.
So often our churches are content with using the same strategies and tools for fishing when doing so looks completely ridiculous. A fisherman who insisted on fishing off the middle of Choluteca bridge "because that's where we've caught fish for years," would not only be a bad fisherman but also might be considered insane.
Yet, as culture has completely moved, we oftentimes insist on fishing with the same strategies and tools. I can't tell you how many times a well-intended person comes up to me and tells me that "we" (meaning the campus ministry) need to start doing "X" because we did that 20 years ago and it worked great! While you won't hear me say "X" will not work merely because it is old (the Bible is old too), the assumption that implementing something again just because it worked back then is flawed reasoning. The river might have moved from under the bridge! The river might have moved four miles down the road!
As a campus minister living on the edge of the our rapidly changing culture, I would rather get out the waders to walk, changing/tweaking my strategy regularly with small nuances in order to be a better fisherman. I like the change, mainly because I am also part of this ever-changing cultural shift we are experiencing.
But here is the challenge. Our churches have spent a lot of money building the bridge. Just because a campus minister wants to hop off the bridge to wade in the water, doesn't mean that our churches think that is the best thing. That might mean admitting that our assets are no longer useful; we don't like to confess that they might have depreciated to below zero. I understand that it takes time to come to terms with antiquated strategies for evangelism, to cut losses, and to build another bridge, but maybe we don't even need bridges anymore...I'm not sure.
All I know is that culture is shifting fast and our churches are VERY slow in catching up. We need to have courage to move forward, not just to change because everyone around us is. We shift all kinds of things because we want the saving message of Jesus Christ to be lived out among all those who are changing. If we refuse to change our strategies for evangelism, we've resigned ourselves to fishing off a bridge for nothing but rocks.
Lord, may your unchanging message of life in Jesus Christ spur us on toward living out Jesus' life in a particular, changing context. Give us the courage to try new methods for spreading your message. Help us to admit our selfish and prideful tendencies. Don't leave us as orphans, swept away in the cultural rapids, but weigh us down with your compassion for the lost. Open our eyes to see what the Spirit says. Amen.
Posted by Unknown at 7:45 AM