As I was preparing last week for a class I taught yesterday in Crockett, Texas for their Summer Series, I realized how big a deal it really was for Paul to call the Corinthians "God's temple."

While his predominately Greek Christian audience certainly understood what happens at pagan temples, they knew Paul's imagery in 1 Corinthians 3:16-17 pointed to the one temple in Jerusalem...perhaps even alluding to the splendor of Solomon's temple back when united Israel received the honor of a place for the name of the one true God.

If there was any permanent place on the face of the planet where God was said to dwell, it was in Jerusalem. The temple of God. While he certainly dwelt among his people in the cool of the day, in the promises made to the patriarchs, in the face of Moses, on the mountain of God, in the tabernacle, between the cherubim, and in the highest heaven, he chose one place to finally rest...Jerusalem.

Even after its destruction in 587BC, Ezekiel imagines the new Jerusalem, the new temple from which streams of living water flow to the whole world, feeding and nourishing it with abundant life...just like the original garden. An amazing image indeed! 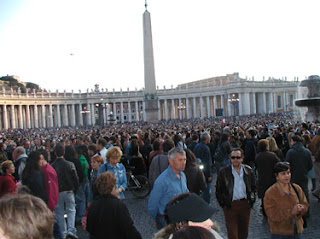 But...who would imagine that someday, this amazing temple would be a group of people!? And that God would dwell among them through his Spirit! That they would realize the unity they have with each other in Jesus Christ (and him crucified) as the foundation of this temple!

It is hard for me to wrap my mind around the idea that this temple is not found in each individual person, but only found as a group. "Ya'll are the temple of God and the Spirit of God lives among ya'll."

If we are to truly be the amazingly magnificent temple of the living God among whom he chooses to dwell over all the other places on earth for all time...then I've got to tell others about this and continue God's work! It is just too big a deal not to.
Posted by Unknown at 9:54 PM